Mardi Gras beads have been popularized for their widespread use on Fat Tuesday in New Orleans. Each year, crowds of people line up to snag as many beaded necklaces as their necks can hold. But where did all of this excitement start? Why are Mardi Gras beads such an essential part of the Bourbon Street celebration? 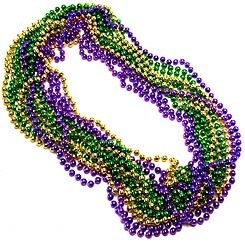 It is believed that Mardi Gras parades began in New Orleans sometime around the 1830’s. These parades typically run throughout the Carnival season, which officially begins on January 6 (the Twelfth Night of Christmas). The carnival season ends on Fat Tuesday, the day before the start of Lent. In 1872, a group of businessmen invented a King of Carnival named Rex. Alongside the people in the parades (who were dressed as high-class aristocrats), Rex tossed sugar coated almonds into the crowds. These Mardi Gras “throws” were similar to the festival customs of the English Renaissance era.

During the late 1800’s, inexpensive necklaces made of glass beads began to be tossed into the crowds by the parade krewes. The beads were an instant hit among the crowds of New Orleans residents and visiting Mardi Gras tourists. It is believed that a man dressed up as Santa Claus was the first person in a New Orleans parade to use the beads in his costume. Other tourists soon followed his lead and they began to decorate themselves with the bead necklaces.

By 1900, over 100,000 tourists traveled to New Orleans to participate in the celebration and to get some of their own Mardi Gras beads. Over the years, other Mardi Gras souvenirs have also been passed out to the crowds during the parades such as plastic cups, toys, Frisbees, figurines, and doubloons.

Despite all of these other souvenirs, bead necklaces remain the most popular trinket passed out during the celebration. Today, Mardi Gras beads can be found in various sizes, shapes, and colors. The most popular size today is about thirty three inches long. They are also now made with cheaper and safer materials like plastic and aluminum rather than glass. Traditional Mardi Gras beads are purple, green, and gold colors. The purple symbolizes justice; the green represents faith; and the gold signifies power.

If you are participating in the Mardi Gras carnival this year or hosting your own Mardi Gras party, make sure you get plenty of colorful beads!